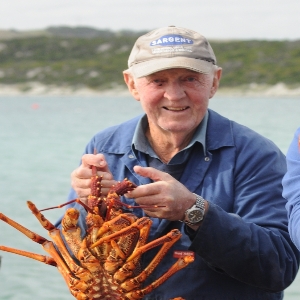 Jack Wheatley has called Flinders Island home since he was a child. Growing up in Killecrankie, in the islands North-West alongside his 11 brothers and sisters, gave him the space to explore its every nook at cranny. Today, as a 4th generation fisher, and the last remaining one on the island, he claims as much as his father taught him, he also has had to learn a lot himself, due to the changing nature of the game. Given this impressive lineage, it is clear that nobody knows the waters around Flinders Island as well as Jack, which is clear by the way he deftly pulls his pots, and handles the live crays ensuring they stay in perfect condition.

While many fishers have left the island, Jack has held onto his family license due to his love for the island, and the job. He couldn’t imagine doing anything else. While seemingly not much has changed in his island home of Killiecrankie, the waters around the island have seen increasing amounts of new fishers as licenses have changed hands.

While these new entrants are working under strict quota, they still present a challenge to Jack, often cleaning out the nearby water in the lead-up to Christmas. The important thing however for Jack is that the ‘Cray’s’ are handled carefully, right up to the time they are enjoyed. This is something he has been passionate about for his entire life.