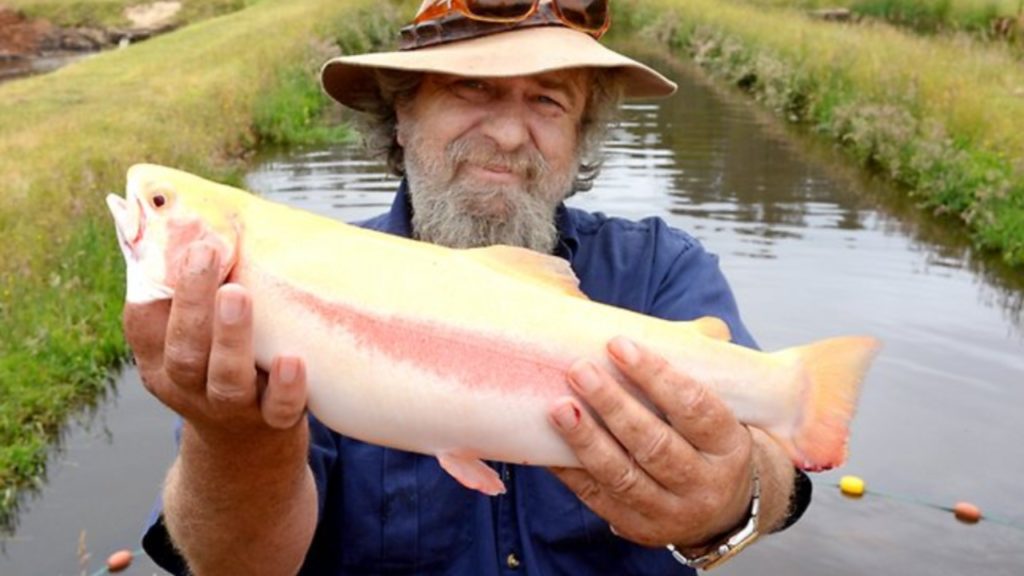 Mate (pronounced ‘Matt’) Batarilo first came across the Noojee Trout Farm in west Gippsland when he was eight years old.  His family stopped there after an unsuccessful fishing expedition in the nearby La Trobe River, to make sure they still had fresh trout for dinner.   Fast forward to five years ago, the Batarilos happened to pass by the trout farm on their way back from a trail ride, to discover it was being auctioned.  The property got passed in and Mate, a keen fisherman, saw the opportunity to rebuild the business.

Together with his son, brother and nephew, Mate purchased 8ha and 58 ponds, and they have since transformed every aspect of the Alpine Trout Farm Noojee. The first hurdle Mate tackled was rebuilding the 58 ponds, draining them, applying a clay base and then building the banks to avoid fish escaping from one pond to the next. While they are still learning and expanding, they currently stock 140 tonnes of trout (about two million fish). Andrew was asked by his father to take over the farm and he is taking it from strength to strength.

Throughout this rebuilding, the Batarilos have been committed to doing their best by the fish, which they know results in both better output and better eating! Each pond can handle up to 4.5 tonnes of fish, but the Batarilos maintain their ponds at less than 2.5 tonnes, which puts much less stress on the fish. This reduced stress affects not only taste, but also results in a very low mortality rate of about eight fish a day, very low considering the massive numbers they work with.  They also keep the water cooler than other trout farms (about 18C), which keeps the trout happier.   The farm has so far had no need for antibiotics, a fact Mate attributes to the low stocking density, low stress philosophy.

The Batarilos also seek to do the best by their other natural resources.  The farm uses only about half of their daily water entitlement, diverting water from the La Trobe River, running it through the ponds to supply oxygen to the fish, before releasing it back to the river again. Once a month, the EPA visits to test water nutrients coming in and being released.  Cleanliness and biosecurity are ensured by quarantining public access to specific dams.

Despite now owning a fish farm, Mate still goes fresh and salt water fishing each month. “I won’t let my mates fish on the farm. We all go to the river because this is too easy.”

It seems we can't find what you're looking for.